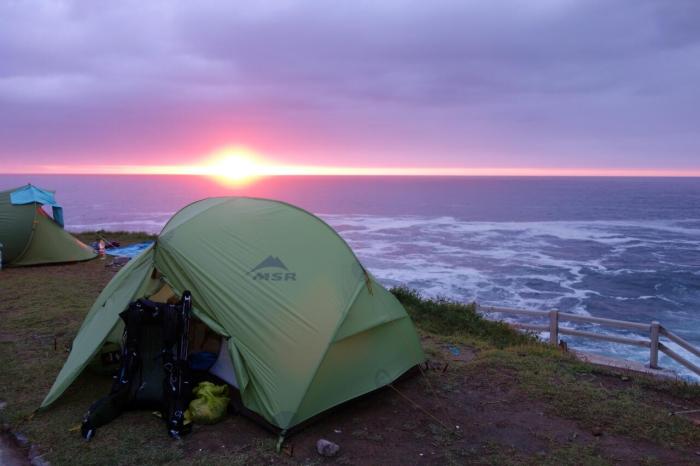 Sunset over the Atlantic from Cabo de Higuer

Our 500 mile long journey along the length of the Pyrenees on the mighty GR11 trail began at dawn from Cabo de Higuer on Spain’s north coast.  After plucking a stone from the Atlantic surf as a totem of our quest (to drop into the Mediterranean in 10 weeks time), we rounded the cape and headed east through the affluent holiday town of Irun, passing early morning joggers and coffee bars. 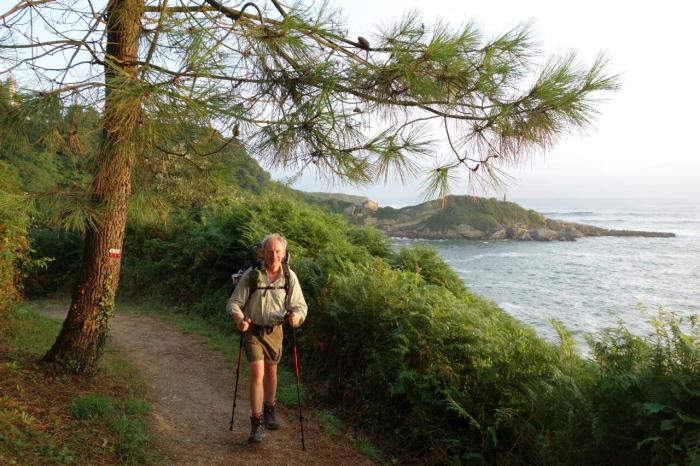 Barry on the trail rounding the Cape

After clearing the suburbs of Irun, the heat was intense, and the trail rose very steeply into the wooded hills. The terrain was unremitting, and would remain so for the coming days as we crossed a series of high cols (saddles between peaks) and descended steeply into lush and forested ravines.  Our first night we camped high in a forest clearing and fell asleep to the sound of bells from wandering cow herds. 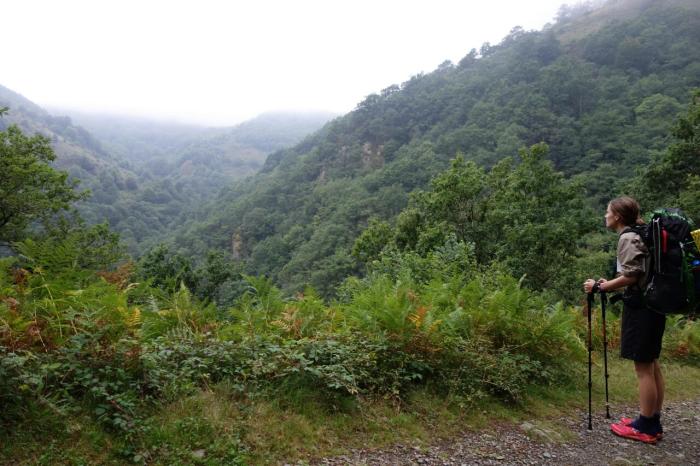 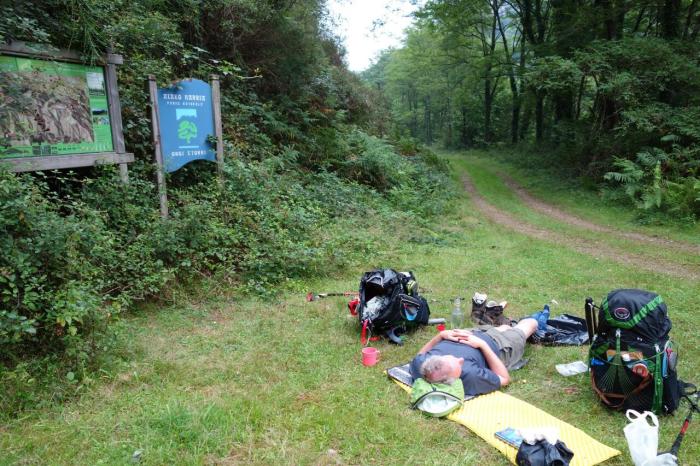 Barry at rest during a tea-break after an arduous descent.

Not yet trail-fit, the GR11 lived up to it’s gruelling reputation, there is very little level walking (typically a couple of hours climbing, followed by a couple of hours down again- this repeated loss of altitude can be frustrating but does enable us to access small towns and villages where we can resupply). One such was the small town of Bera, where we arrived in the early afternoon of day 2 to find everything closed for siesta! Fortunately the tourist office was open and the friendly woman told us that we were welcome to sleep under the arcades of the town hall or in the churchyard! This typifies the more relaxed attitude in Spain to camping (and living in general). 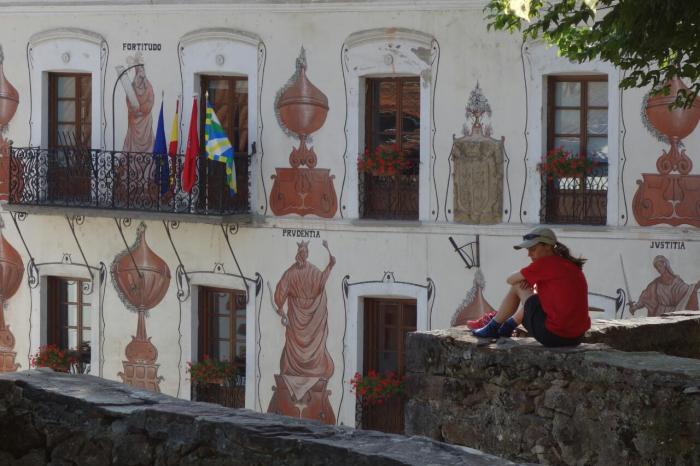 Sitting in the churchyard overlooking the philosophical murals on the town hall.

We were pretty hungry so as soon as the supermercado opened we bought a feast of fresh food and sat munching soft bread, ripe tomatoes, salami, cheese and olives on the bench outside. We spent a beautiful warm evening in Bera, looking out across the roofscape of old Basque houses, listening to the life of the town drift upwards and mingle with the voices of the church choir. 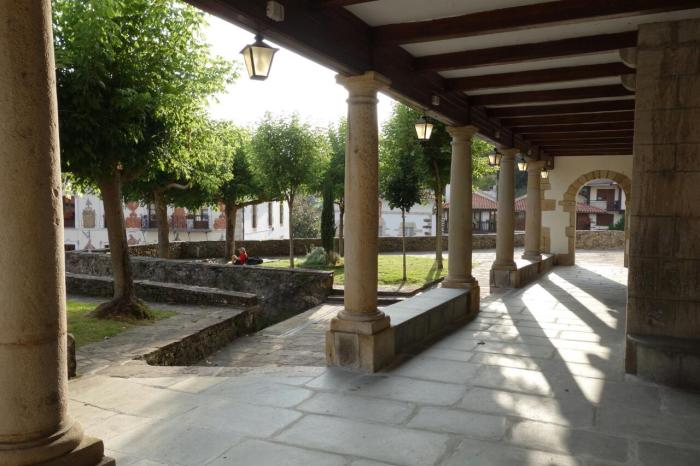 Like pilgrims of old we spent our night in Bera under the shelter of the church porch, we laid our mats out on the warm stones and watched bats flicker in the dusk. 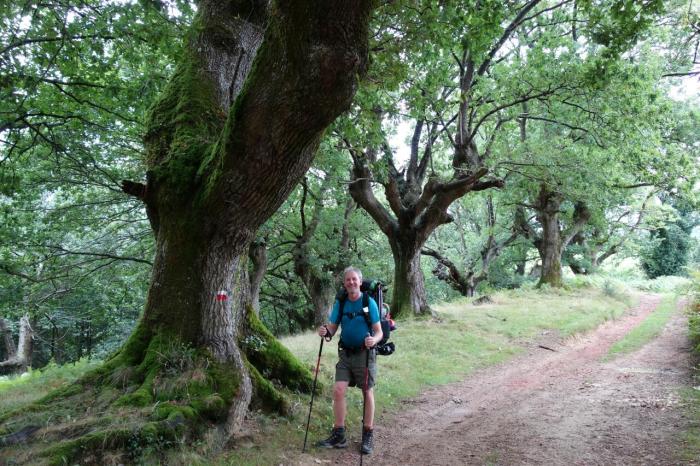 Despite the tough trail, the Basque landscape is extremely varied, with a mix of open pastures, young plantation woods and ancient oak and beech pollards. In the past these woods would have been managed to provide essential produce, but now there are few signs of this. Passing old tumbledown walls and abandoned houses, the landscape has lost much of its cultural life.  Wandering deep into the hills, the land feels lost in time. 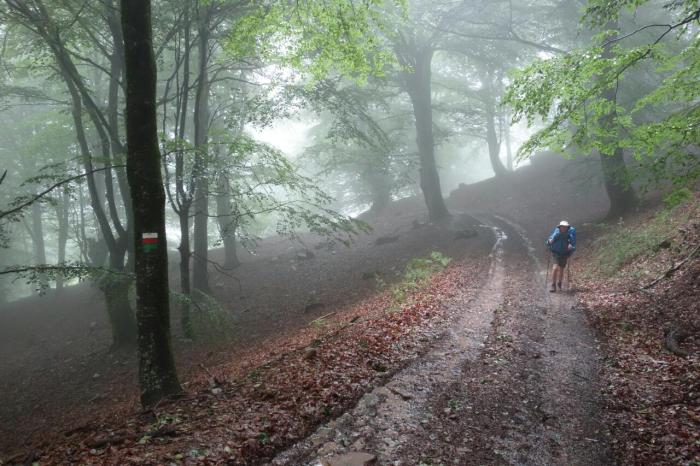 Mist in the ancient beech forest.

On day 3 the rain came, and persisted for 24 hours while we struggled to keep ourselves and our gear dry. We had expected the August heat to be our main challenge at this stage in the walk, and the unexpected rain was trying at times, but we are well prepared and together we kept in good humour. Acceptance of what comes is part of life on the trail and one of its most important lessons. That night, above the sound of the rain on the tent we were woken by the squealing of wild boar- the chorizo which we had left in the tent porch was swiftly bought inside and wrapped in plastic bags in case its strong odour attracted them!

The rain persisted the following day (day 4), and arriving in Elizondo we took refuge in a b&b run by ex New York cabbie Mark Woldin. Mark was a great host, sharing beer and whisky with us all evening, with stories of his life as a cabbie and some highbrow literature thrown in. Tired, damp hikers were arriving in town all evening, some having covered 30km that day.

The next day (day 5) we climbed high into the hills (and into the clouds), the mist hung in the beech forests and the dark and twisted shapes of the trees loomed around us. 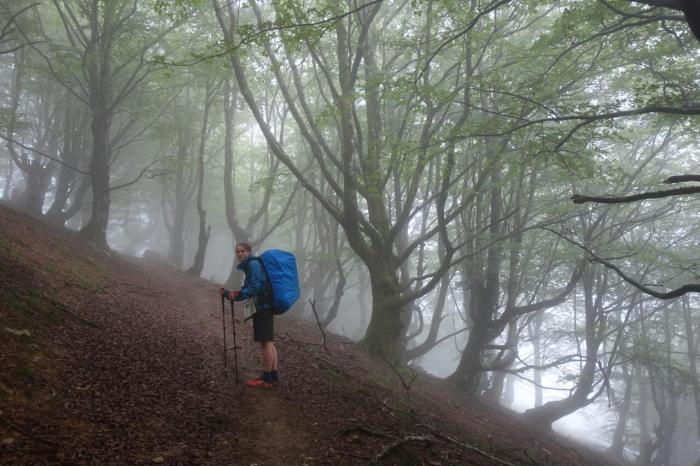 Atmospheric walking in the misty Beechwoods

We climbed up to a hunters cabin on a col between rocky peaks. The trail was steep, overgrown and muddy, and we were exhausted by the time we reached the col to camp. Cold and hungry we pitched tent and cooked up some instant ham and mushroom spaghetti- lots of carbs and protein to replace that energy burnt! 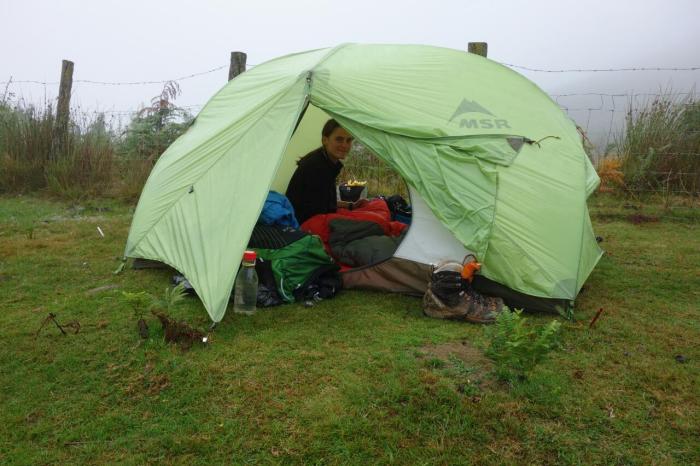 Pitched up on the col, Rebecca cooking dinner from the comfort of a sleeping bag.

Sometime later that evening the sun finally pierced the mist, we scrambled out of the tent and saw the cloud breaking-up to reveal the landscape around us. After two days of walking this was the first time we had seen further than a few hundred metres! 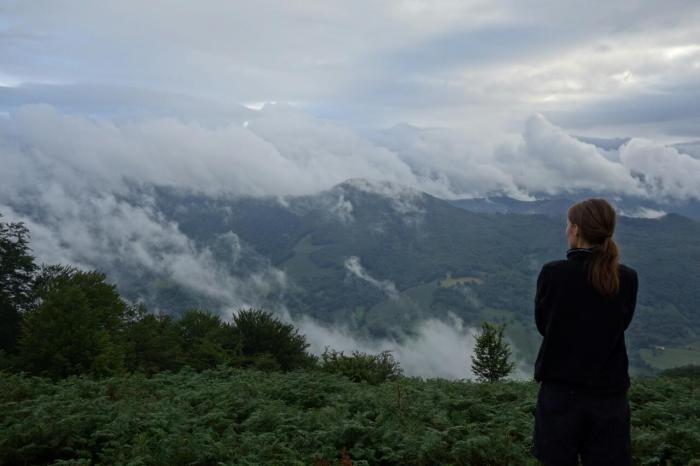 Misty whisps rising from forested slopes below, like soft smoke in slow motion.

Day 6 and sun at dawn, a graceful red kite soared overhead, its red tail twisting as it banked around- not bad for breakfast time! As the morning warmed and the thermals strengthened, huge Griffon vultures rose languidly from their roosting cliffs, gliding past as we walked. While the cloud lay in the valleys below, we traversed sunny pastures with the bells of ponies and sheep jangling like windchimes. The short ridge-top pasture seemed to provide rich pickings for red kites as they passed low over the ground, dropping onto earth worms and beetles. 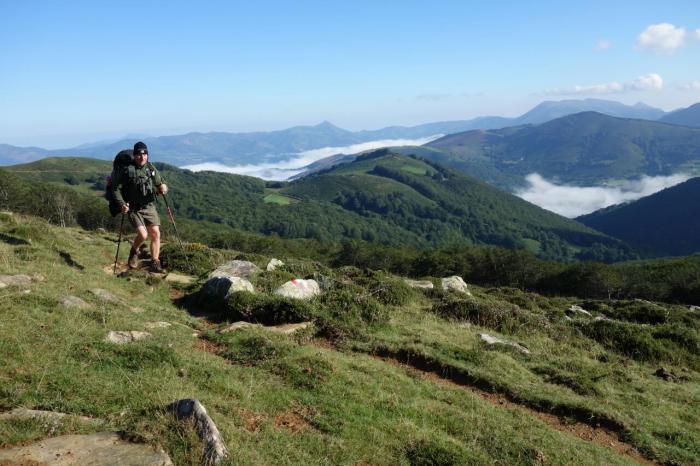 Above the clouds and easy going on flat, short turf. 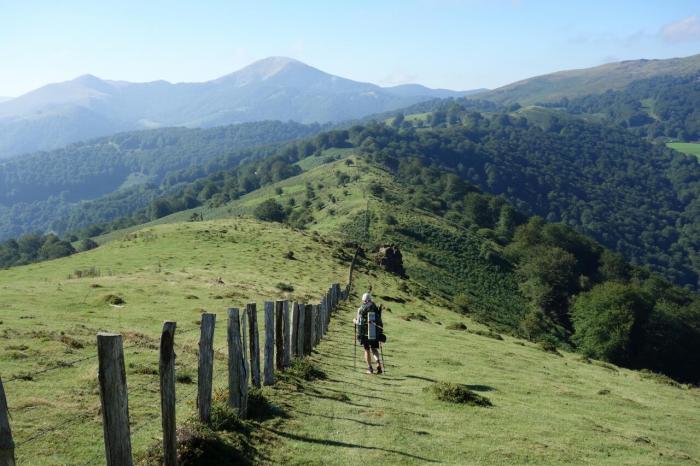 Walking along the French-Spanish border fence at 850m.

The rest of day 6 was a joy, our legs still felt strong and so far we had no foot trouble. All day we walked high above then surrounding valleys, and with each ridge crossed new vistas opened up before us. Mid afternoon, we caught our first glimpse of the main Pyrenean range far to the east. Still nearly 10 days walk away, it was exciting, if a little sobering, to think of our coming journey through that jagged, misty blue wilderness. 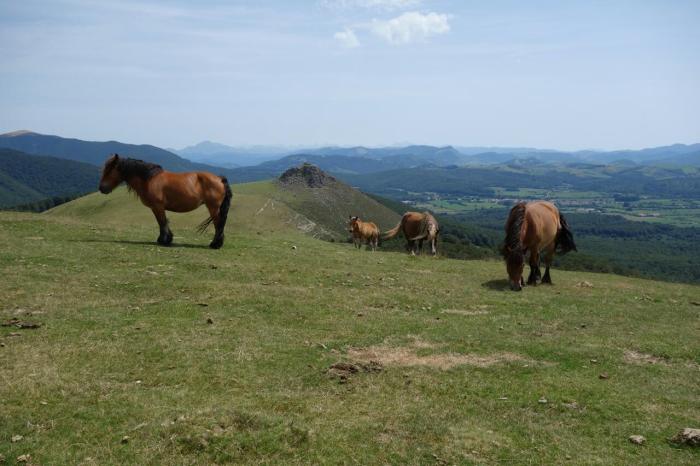 A constant feature of of hiking this week, the sturdy Basque pony. Far beyond lies the main Pyrenean massif. 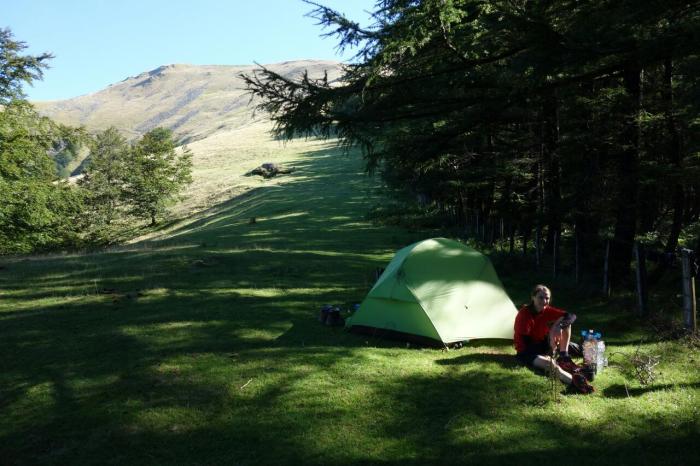 Camp below Aratun peak on day 6. A flock of 30 choughs swirled and called from the slopes in the late sunlight.

By any standards, day 7 was a killer. After a week of hiking and over 4km of vertical ascent (and nearly as much down again), we sorely needed a rest. A steep descent from the col where we camped led us through moist forest, where we stopped early for lunch (tortillas, cheese and salami),  legs weak with hunger and tiredness. The descents are often tougher than the climbs. The afternoon was a brutal 500m ascent up steep, bracken covered hillsides.

On one of many rest stops, Barry spotted a high circling group of raptors and got rather excited, ‘black kites’ he exclaimed! This flock of 28 birds passed south east over the forested ridges as they migrated from the north down into Spain and onwards into Africa. This route will have been used annually for thousands of years.

So, on day 8, here we are on a well deserved rest day in the small village of Burguete, which lies near the beginning of the Camino de Santiago pilgrimage trail. This morning we woke to see pilgrims walking past below our window, scallop shells hung on their backpacks and staffs in hand. Reflecting back on the first week of our wild pilgrimage it is certain that the GR11 has challenged us already, and rewarded us for our efforts in some measure. But this is no rational quest, and like the Camino pilgrims there is something that keeps us walking and seeking, to see what lies beyond the next turn of the trail. Tomorrow we return to the GR11 and all that it may throw at us.

Hope you have enjoyed reading about our journey so far…….

2 thoughts on “GR11 Week 1: Baptism of fire in the Basque hills”