After what seems like an endless winter in the Fens, we were raring to go for our first hike of 2015, part training (for the GR11 in August) and part pure enjoyment. The 4 day weekend lent itself to a 3 day hike and the White to Dark (W2D) trail fit the bill nicely.  The W2D was designed and way-marked to celebrate 25 years of Country Walking magazine and takes in some of the best landscapes of the Peak District linking the limestone to the darker gritstone.

The trail is 27 miles long, starting from Bakewell and ending Hope, taking in Cressbrookdale, Eyam Moor, Stanage Edge and Ladybower reservoir. Resupply stops are no problem with the path weaving between small villages/towns with either a shop or pub for refreshment. Crucially for a one-way walk, there is a very good bus service linking Hope to villages back along the route. This served us well as heavy rain on Friday forced us to shorten the route (by cutting out day 1) and start instead at Litton. 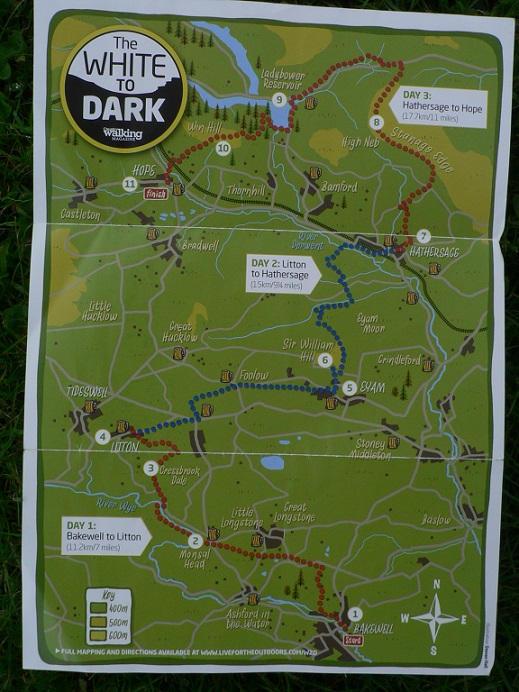 Currently living in the flatlands of Cambridgeshire the aim of the weekend from a training perspective was to build strength on hills and endurance with loaded packs. We were travelling self-contained with full camping and cooking gear.  This would help set a baseline for our fitness and allow us to gauge where were against where we needed to be in August.  It was also an initial test of some new gear, notably our MSR Hubba Hubba HP tent and my Scarpa Delta GTX boots. With work schedules having precluded much winter walking, hill training for the last few months had consisted mainly of going to the gym and ramping the treadmill up to 15 degrees!

An unpromising start, interrupted by having to go back because the car alarm went off and taking a wrong turn out of the village. Things soon improved as we descended into the limestone valley of Cressbrookdale, the low clouds started to clear and 3 buzzards called and wheeled in the rifts of blue above. With Eyam Moor on the horizon, it seemed to take forever the get to the town of Eyam at its foot. We were slowed down by many tricky stiles, either narrow stone openings with fiddly wooden gates (involving some inventive jostling to get the rucksacks through) or stone steps over drystone walls (fine if you aren’t top-heavy).  Anyway, it was test in sure-footedness which could only stand us in good stead for things to come. 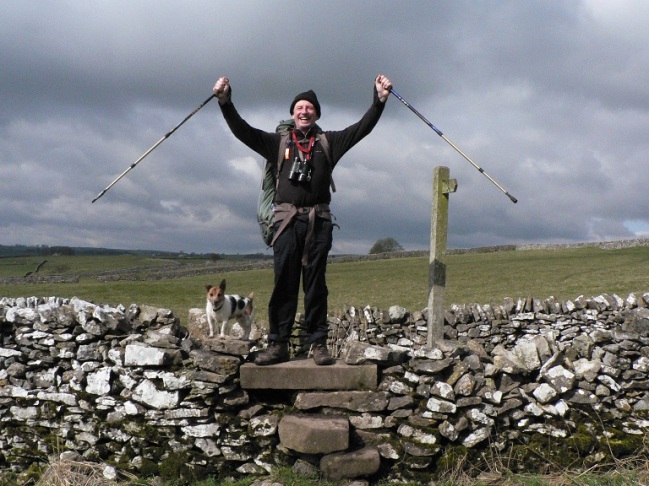 Barry and Oscar negotiating one of many stiles in style!

Just before lunch we descended into Eyam under sunny skies, with a quick pit-stop for a scone and tea before tackling the steep zig zag path onto the moor. Striding up to the top of the moor, feeling pretty strong, we took a final look back at the limestone country before the landscape opened up before us toward Stanage Edge and great expanse of the Dark Peak.  Spying Hathersage in the valley below we felt confident to stop for a lunch-break in the lee of a stone wall.

Landscape below Eyam Moor on the descent to Hathersage

…Later on the descent, the path wound down to a river valley through gnarled old oak woods, all of which was very pretty until the path conditions deteriorated, making it slippery and slow going.  We were very tired by the time we made it to the main road, but there was more to come, a section of road-walking and a further mile of trail to the north of Hathersage to reach North Lees campground. It was a good lesson not to underestimate the scale of a landscape and how path conditions can be tiring and time consuming.  Settled in our tent we reflected that it had been a good day, although testing at the end, but the test in itself was good knowledge of our own capabilities. Somewhere in the woods we heard the hollow, lonely hooting of a Tawny owl.

Reluctant to rise too early as the sun was not up and the campground cold and damp, we packed up, trying the avoid getting everything muddy.  By 9:30 we were at the foot of Stanage Edge, feeling surprisingly fit and pleased that with 3 litres of water on board plus food the rucksacks were comfortable (14kgs total). A gorgeous morning with the bubbling calls of curlew across the moor, we were lucky enough to see a Ring-Ouzel among the boulders at the foot of the edge. Following its echoing call among the rocks, a smart male popped up above us, like a blackbird with a white collar, an enigmatic bird of wild and rocky places.

Once up on the Edge, we were in for a treat, a long hike along the cliffs with panoramic views of the moors, shifting light across the landscape, and red grouse calling from the heather. Determined to make the most if the views we stopped for an early lunch, unpacking the trusty Whisperlite and boiling a pot of chicken-curry noodles. 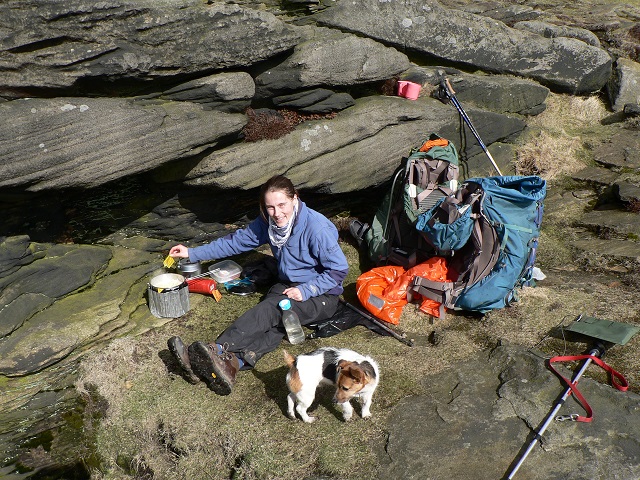 A shelterered spot for a brew-up and some noodles on Stanage.

With our first glimpse of Ladybower wood in the distance, and aware of how we underestimated timing yesterday, we made good time along the rest of Stanage, the peat paths were at times tricky and messy, but my Scarpa Deltas were performing well. Submerged to the ankle a few times, my feet were still dry and despite the uneven terrain, no peep of a blister or hot-spot. In fact we had both been blister free, even Barry in a beat-up pair of Meindl Borneos.

Descending towards Ladybower reservoir and across the dam we considered the prospect of making it up and over Win Hill that night, but preferring to stay wild and free we made camp in the forest. We found a secluded spot in a clearing with stream and small pool from which we drew our cooking water. 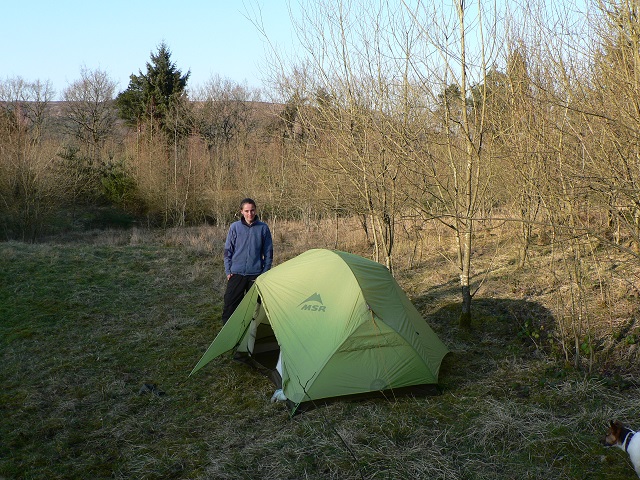 This would be our second night in our MSR Hubba Hubba, (blog about this to follow). Our first impressions have been favourable, with enough internal space to sleep (both length and width), good ventilation and adequate porches to keep our 70litre rucksacks protected from heavy dew.  This of course in addition to super light weight at 1.6kg (that’s only 800g when shared between two people!).

Day 3: Win Hill to Hope (via a circuitous route).

With the end of the bank holiday looming, we reluctantly packed-up and left our forest clearing, still amazed at having found such a perfect spot. The sun was already hot as we worked our way up to Win Hill summit, still feeling surprisingly fit, the only issue for me being some bruising on my hips from the pressure of the hip belt. As we reached the summit the views opened out across our route from the previous two days, and there was the sense of achievement of having traversed that landscape through the effort of our own feet. To the northwest a bank of cloud lapped against the edge of Peaks, covering Manchester and Sheffield, while all day we basked in warmth and sunlight. 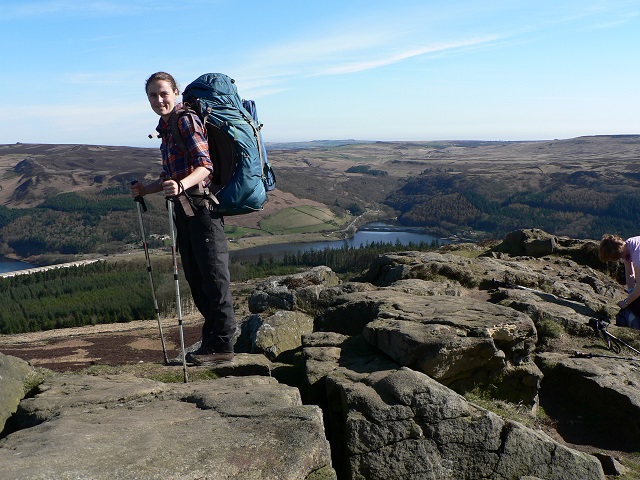 Atop Win Hill looking with Ladybower behind. The only irritation was drone buzzing around our heads…we come to the hills to escape the surveillance society!

A steep descent to Hope ended at the Old Hall Hotel with sandwiches and beer before catching the bus back to Litton. Back at the car it seemed a long time since we had left, full of expectation and two days of walking freedom ahead. It was the end of that simple freedom that was hard to bear as we joined the snaking lines of Bank holiday traffic. On reflection it was a thoroughly worthwhile weekend, the trail itself was varied and scenic throughout, and as with any extended hike, we learned many useful things about our kit and fitness that will and enable us to tweak things before the next trip. We plan to return to do Day 1 of the White to Dark (Bakewell to Litton) through Cressbrookdale later in the spring- only then will we be true ‘White-to-Darkers’!

Sunshine, beer and good food at the excellent Old Hall Hotel in Hope.