Beacon Tarn to Wet Side Edge

We woke to a still, overcast morning, but thankfully the cloud base was above the summits, and the day’s objective, the Coniston Massif, hung blue-grey in the middle distance.  Hiking through the marshy valley leading down from Beacon Tarn I kept glancing at the ‘Old Man’, scarcely believing that we could make it up and over there today.  We made poor time over the 2 miles to Torver at the foot of Coniston, but still found time to stop at the Deli on the main road for a baked potato and other tasty supplies. Returning to the trail we braced ourselves for the ascent to Goats Water, high in a corrie below the ‘Old Man’. 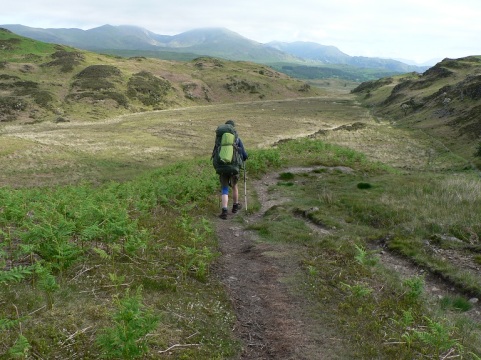 The ascent started innocuously on lanes and tracks, climbing steadily, but we soon found the disparity between our paces caused problems. I like to hike faster in general (and in this case was anxious about how far we had to go), Barry likes to walk slowly and preserve energy (a good strategy given our pack weights and the terrain ahead).  Add to this the fact that we got lost in some mine workings on the way up and things got fraught. This was bound to happen, and I had expected it. It is one of the challenges we will face as a couple on a long distance hike, and I know it will take time to find an equilibrium with each other. 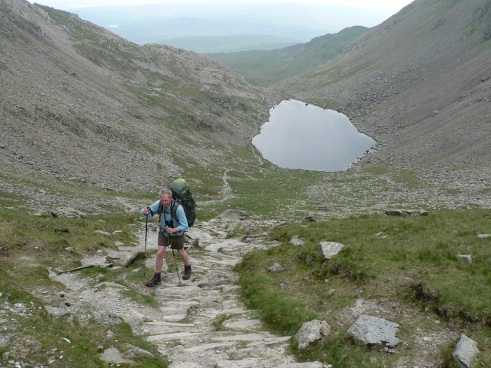 By the time the final push to Goat’s water really kicked in, we were back in good spirits (how else do you cope with hauling a 17kg pack up a mountain…?), pacing ourselves as we passed beneath great rafts of talus and scree. The slopes of the mountain glowered above us as we were funnelled into the head of the upper corrie to the shores of the tarn. The calls of a ring ouzel echoed among the boulderfields and peregrine falcon circled far overhead, a welcome sign of life in this desolate place. Goat’s water itself was cold and dark, it felt like a place bereft of warmth or life, so after drawing water, we were glad to move on and ascend the steep headwall.

The aftermath of the climb. Only a large helping of tortillas, salami and cheese would get him going again.

Despite the stiff climb to Goats Hawse, we were rewarded with a superb high-level promenade across the slopes of Coniston towards How Crags and Swirl How. The drop from the trail to the left was dizzying at times, but it afforded great views down into the wild, sun-splashed valley beneath Grey Friar. Passing the summit of Swirl How, the highest point of the day, swifts and house martins swept past us, while we started to prospect for a camp site. We finally found a spot perched on a high rocky shoulder on Wet Side Edge.

Our eagles perch on Wet Side Edge high above Little Langdale

Although we had resupplied with over 4 litres of extra water from Goat’s water, we were getting low again, and there were no running water sources to be seen. A little way above camp I found a shallow, peaty pool, obviously used by sheep, which looked a bit stagnant. Aware of the risks, I treated the water with Chlorine Dioxide tablets as an extra precaution, and this provided enough safe water until we reached Little Langdale in the morning. As evening came we ate macaroni cheese and dried apples, watching the sunlight trace the contours of the distant fells. Later, Bowfell and the Langdale Pikes were engulfed in giant waves of summit cloud. A quiet night, with the occasional sound of music and barking dogs from deep in the valley below.