Sometime in the grey light before dawn, a light rain pattered on the tent, but by seven the low cloud was dispersing and shards of silver sunlight were moving across the distant hills. There was still rain forecast for later but we were grateful to pack-up in the dry. The first challenge of the day was to find a place to park the car incognito for a week in Ulverston. We drove the backstreets and picked an inconspicuous spot, hoping would no-one reports the car abandoned. A quick march down the hill and we were at the official start of the Cumbria Way, a conical monument containing rocks from the different geologies along the route. There is always a sense of occasion at such moments, and I often feel quite moved, I think it is the sense of the trail unfolding (untrodden but waiting), of the adventure (and challenges) that lie in wait, the undertaking of journey that, in some way, will change us.

Day 1 was heavy on gates and stiles. Many required some interesting contortions to get though with a big rucksack!

After leaving Ulverston the trail wound up into the low hills and valleys to the north, traversing pastureland, farmyards and sections of country lane. It was slow going as many awkward gates and stiles slowed progress.  We would often have to take our rucksacks off and lift them over. The landscape was pleasant and the gradients forgiving, but it was not overly interesting. By early afternoon, the rugged country around Beacon Tarn was drawing closer and views opened up to Coniston beyond.

As we approached the high country, we passed through what seemed like areas of semi-abandoned pasture, the wildflowers and old hawthorns (in full blossom) were a treat and welcome relief from the bright-green fertilized (wildlife poor) pastures of the previous miles. 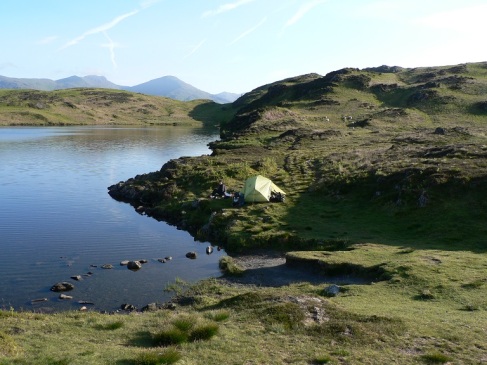 Our wild camp at Beacon Tarn with the next days target, Coniston Old Man, beyond.

The final haul up to Beacon Tarn at days end was tiring, but we were rewarded with a beautiful camp spot on the water’s edge and a clear, still evening (amazingly insect free too!). We drew water for cooking and drinking from the tarn, water for drinking was filtered using our Sawyer mini. Despite walking all day with cumbersome packs we felt fine and energetic enough to explore the slopes around.  Late in the evening three fell runners came by and went in for a swim, the water was surprisingly warm. 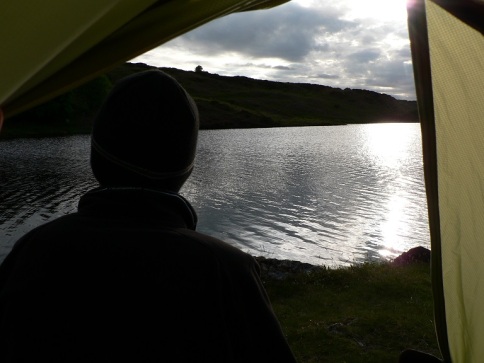 Evening light over Beacon Tarn seen from our tent.

As the evening drew on the light changed and a light breeze sent patterns of silver ripples over the surface of the water. It was a moment of contemplation, and one of the privileges of wild camping, one of those times when everything comes together and we say ‘this is why we do this’.

Before sleep were charmed to hear a cuckoo call from a small cluster of trees across the tarn. Up there in the quiet, with the rock walls rising around us, the call was loud and resonant. We were reading aloud to each other, but in the end we gave up and listened instead to his lonely, insistent calls.  Time and time again when wild camping we have been rewarded by mysterious and intimate experiences of nature, the things that are revealed by staying behind when everyone else leaves, the things that happen when the world is not looking.