Through the gates of the mountains

(Please click on photos if you want to enlarge).

This week things got harder and more spectacular in equal measure as we left the ‘hill’s’ of Navarra behind and entered Aragon and the mountains proper. The forested hills of the Basque country seemed like a distant memory as we climbed up rocky ravines to our first Alpine pass of the trip, and traversed sparkling high altitude meadows.   Totalling up our efforts so far we have ascended over 10,000m since we left Cap De Higuer….that’s more than the height of Everest. Our guidebook says we will be doing this three times more before we reach the Med! The GR11 is a roller coaster of giant proportions.

On day 13 we entered the limestone gorge of the Barranco (river) de Belabarze and began the long climb up to the Valles Occidental (Western valleys). Passing between the limestone crags of the river (picture above) with vultures soaring overhead, it really felt like we were entering another world.

Laying looking up at the forest canopy.

En-route we walked through sparkling water meadows where we made camp early and had time to relax and absorb the nature around us.  Barry went off to explore the surrounding pine forest, while I sat on a rock in the glittering stream watching fritillary butterflies.

On that warm afternoon the scent of pine infused the air and the late sunlight cast long shadows across the forest glades. The forest had a wild and tangled atmosphere, with fallen trees, colourful fungi and wild boar diggings all around. Crested tits called from above and a male, rose-coloured bullfinch fed its mate with wildflower seeds. In this timeless place all felt quiet in the world.

On day 14 we reached the lip of the Western valleys, staying at a campsite surrounded by towering limestone peaks. From our pitch we could watch the drama of the clouds spilling over the ridges at sunset, while a noisy family of red-backed shrikes fed on beetles and grasshoppers in the bushes behind us. That evening we made the most of the campsite bar, devouring bocadillo lomo (pork baguettes), salad, chips and beer, to gather strength for the hard push over the pass of Petraficha the next day. 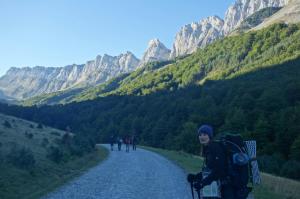 Dawn on day 15 and the valley was cold and heavy with dew. As we walked east, the sun lit up the dramatic Alano ridge, but it was not until an hour later that we reached sunlight and hat and gloves were swapped for t-shirt and sunscreen. The col of Petraficha lies at over 2000m and the ascent picked its way up the steep, dry and rocky sides of the Barranco.

The views back to the Alano ridge were spectacular.

By mid morning the sun was hot in the rocky canyon and the going was rough and tough with loose rock underfoot and some steep drop-offs needing concentration. If the sun’s heat was amplified by the surrounding rock, so too were the whistles of marmots in the scree, our first of the trip. It was a trying climb that seemed never ending, so it was with relief that we reached a grassy bowl below the final ascent where we could rest and eat.

With our early start we had forgone a proper breakfast (only two mini croissants). By 11am, Barry was running out of energy and becoming grumpy. I wanted to carry on, but Barry insisted we got the cooker out to boil up some noodles. Thus ensued a rare argument! After the food we both felt a lot better and were treated to our first views of four graceful Chamois, and took time to appreciate the mountain flowers.

Rest breaks gave time to appreciate the details of our surroundings, not least the carpets of wild crocusses… 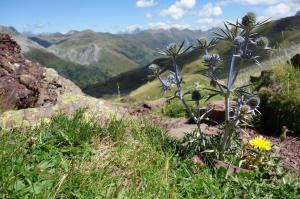 We reached the col of Petraficha by early afternoon, no-one we saw up there did not look similarly knackered! The descent opened new vistas with the most spectacular scenery we had seen so far. 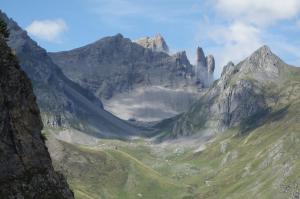 As we descended sunlight and shadow played across the dramatic ranges and fingers of evening cloud crept between the granite spires.

Camp that night was the valley of La Mina, the only problem being that from 500m above, we could see hundreds of free ranging cattle. The nearer we got, the more dung also appeared, especially on any area of flat ground …aka camp spots. But, being canny, we found a cow free place overlooking the river, and spent a gorgeous evening with a pair of Egyptian vultures and our first short- toed (snake) eagle soaring above. Evening set behind the rugged skyline and deepened into a twilight with a rising moon and soundtrack of tinkeling cowbells. 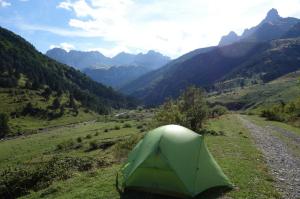 Day 16 and another sparkling clear day in the valleys. We began the long climb up-valley to the much anticipated ‘hidden’ valley of Aguas Tuertas. 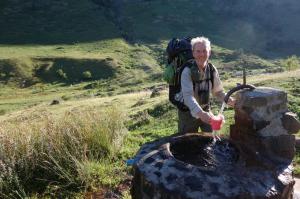 Rehydrating at a crystal clear fuente, straight from the mountain rocks. 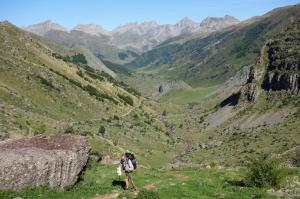 Barry on the ascent to Aguas Tuertas, the valley of La Mina behind him.

High expectation often results in disappointment, but in the case of Aguas Tuertas, a high and hidden alpine valley, we were to have one of the most special experiences of our trip to date. Sometimes when travelling, a variety factors come together to produce magic, and that glittering morning at Aguas Tuertas was one of those moments. We have decided to do a separate blog for this special place as an addition to this blog to follow next.

Day 16 had more to give later that evening as the spectacular Garve d’Aspe came into view, a vast glacial cirque of coloured, folded rock. The chance to camp amongst such splendour was a dream, so we sought a flat spot perched high with panoramic views. In the distance another long distance hiker sat alone on a grassy knoll absorbing the scene. Since we left the Basque hills other GR11 hikers had been few and far between, and the sight of one is always a matter of mutual curiosity. The lone hiker left his perch and waved across to us as we set up camp, sometimes it would be nice to chat with other folk on the same long journey. 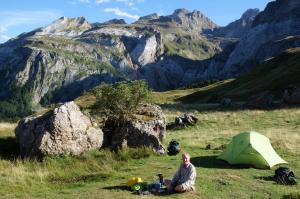 Barry cooking dinner at our camp overlooking the Garve d’Aspe

That evening we saw chamois on the scree above and the alarm calls of marmots alerted us to the presence of a pine martin which we picked out with the binoculars among the boulders. A warm, still night followed with a tawny owl hooting from the forest and the sounds of wild boar. 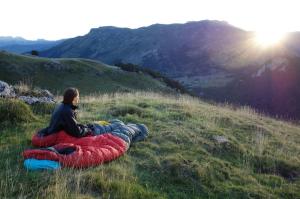 Day 17 and peeping out of the tent at the paling sky we dragged our sleeping bags out onto a high knoll to wait for the dawn. The outlines of the peaks sharpened as the light rose, and we sat munching chocolate cake until the sun eventually crept between the granite spires sending sunbeams slanting across the dark valleys. 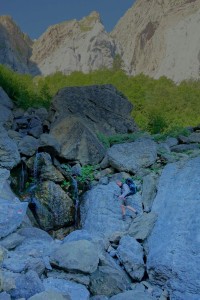 A spectacular walk around the Garve through quiet forests and across steep cascades took us momentarily into France before descent into the ski resort of Candanchu. Compared to the pristine mountain landscapes we had walked through, the ski resort was a scar on the landscape with ski lifts strung across the mountain, huge car parks and cavernous, empty hotels.

On the forest trail out of Candanchu we met two Italian pilgrims walking the Camino Santiago. They had started walking from their home in Italy 5 years ago and had walked 400 miles for a couple of months each year since to get to this point. They hoped to finally reach Santiago de Compostela (in the far west of Spain) in the next year or two…not bad for a couple who must have been close to seventy!

Scallop shells, symbol of the pilgrim, hanging from their packs.

Barry asked if he could take their picture and they kindly agreed, saying ‘we are not important’. These quiet, unassuming people, who are nonetheless undertaking an extraordinary journey, are the true pilgrims.

Barry enjoys cooling off in a cool mountain fuente….a hot afternoon at 31 degrees.

With thunderstorms forecast the next day, it was a hard push up the valley of the Rio d’a Canal Roya that evening to camp just before the pass. This would enable us to get up and over early the next morning and safely on the descent to the town of Sallent de Gallengo (and our rest day) before any lightening came.  Our camp high in the valley was a rather bleak spot, but Barry spotted a golden eagle hunting marmots across the mountainside.

Before nightfall the sky turned red and we peeped out of tent to see a small herd of horses and mules watching us curiously,  before wandering off down the valley, their bells clanking into the darkness. That night were woken by the tremendous flashes of a distant lightening storm, but luckily it stayed far away…

View of the distinctive Pic du Midi d’Ossau in France from across the Ibon (lake) d’Anayet.

Dawn on day 18, the peaks above turn pink with the rising sun as we gulped bitter black tea and ate bread and cheese. We packed quickly and made quick progress towards the steep headwall of the valley. In the dawn light we disturbed a family group if wild boar feeding on a cow carcass. They ran away across the hillside with the adults in front and behind and the two young in the middle, a rare treat to see these shy animals so close.

The push up the headwall was on steep and stony zig zags, and with large thunderheads appearing in the distance, and being so high and exposed, it was quite stressful (mostly for me, Barry was characteristically laid back…). Once on top the magnificent Pic du Midi d’Ossau was visible across the lakes, standing proud of the other peaks, early morning cloud drifting across its flanks. Once we could see the terrain and descent ahead, things got more relaxed and we enjoyed the calling, swirling choughs over the crags. The two species, alpine and red-billed, swirled together, enjoying the updraughts and their aerial abilities to the full.

Descent down the valley to Sallent de Gallengo and a much needed rest.

Despite the darkening skies we passed many day hikers (often ill equipped) heading up to the heights…..three hours later, from the comfort of our hostel room, torrential rain and thunder engulfed the peaks around us. For only the second time in three weeks we had a bed and warm shower.

So, that was week three of our GR11 adventure. Back on day 13 as I sat by the stream watching a fritillary butterfly I thought about our journey and why it was worth all the effort. I asked myself ‘ how is sitting here watching this butterfly after 11 days of trekking from the sea different from stepping out of a car and seeing the same thing? How is it qualitatively different?

In a world where anything is a mouse click away or available for the right price, where ‘progress’ tends towards making everything easier, is there not something to be said for setting the clock back, for making things harder, and in doing so, reinstating some if the value and meaning that has been lost? To push back against pace and progress, and through some kind of effort to rediscover the true value of things.  Sometimes in giving ourselves deeply to an experience we may more deeply receive in return.  What it is we receive exactly is hard to name, but John Muir sensed it too when he said ” in every walk in nature one receives more than he seeks”.

Sharing the moment with a confiding fritillary.

Barry has his take on our experiences and will talk more about this in his extra blog about the alpine meadows next. Thanks for reading, we would appreciate any feedback.

4 thoughts on “GR11 Week 3: Through the gates of the mountains into the kingdom of Aragon”